I only have one picture of the estate we were living in. It is from the outside.

When we came to the place it was dark and I was feeling miserable. When we stopped at the Severomuisk range we agreed that Walter and Terry should drive ahead and arrange some housing in Taksimo. I should wait for the rest of the gang. When they came we headed of.

Then, in a silly little stream I tipped over. Flooded the engine with water. Erik and Steve gave me a hand and we got the bike ashore. I was wet from my helmet to my boots. We drained the air filter housing and took out one plug. Then we put the bike on its side and cranked the engine out of the cylinder. I was now getting cold. When we got the bike to run again it was getting dark. We had 100 km's to go. I checked the oil level of the bike when it was running OK. The oil looked like milk. Nothing I could do about it before I came to Taksimo.


It was a long and cold drive. I was wet to the bone. When we finally got to Taksimo I was freezing :huh We found the guys and the place we should stay. The kind lady there fired up the Banja and soon I was a happy man again

Just afew more pictures from the road to Taksimo

Here we have Terry's bike after being fixed with "Biltemastropp" :clap The crazy part is that Terry didn't slow down afterwards :rofl 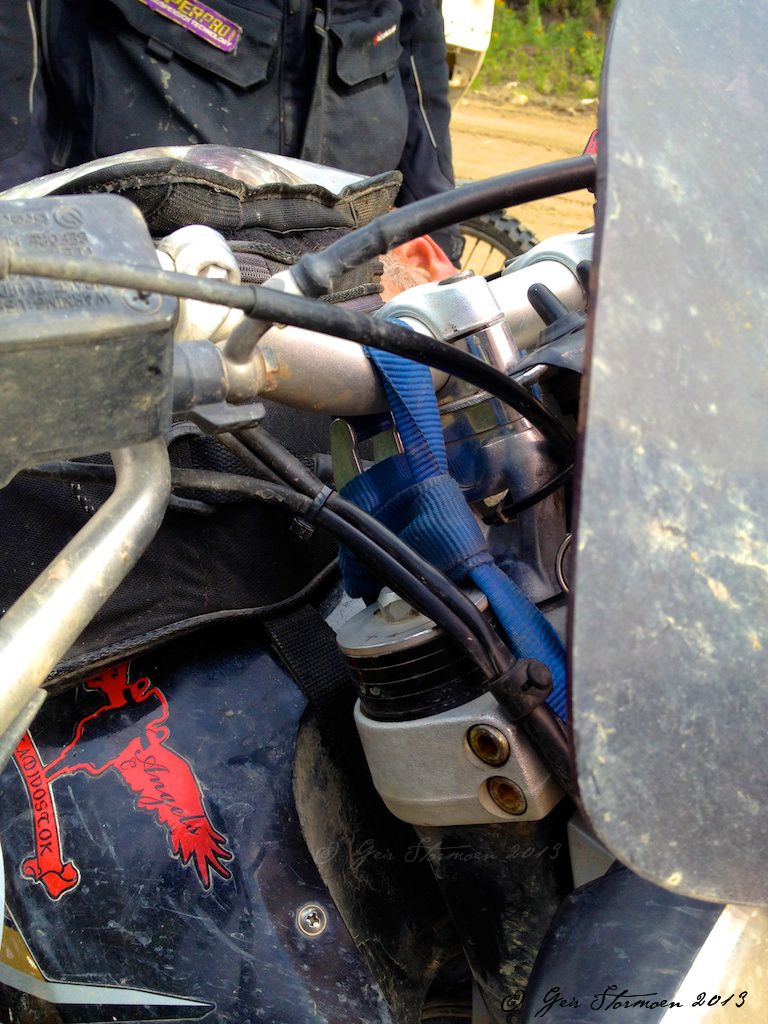 Terry with our helpers in Novyy Uoyan.

We tried, but gave up and took the rail road bridge. These guys just had to try the river

I dismounted after crossing the Vitim and had a chat to Terry. I explained that Steve had missed the turnoff and we may have to go back to look for him, but as we were talking, 600 yards away on the far side of the Vitim bridge, we saw two motorcycle headlights ... Steve and Erik. Steve: Remember, the guy had just learned to ride a bike 3 months earlier ... he rode across the bridge! KUDOS ! Erik played it safe ... I guess a sky diving instructor is more aware of the risks than most people, and has probably seen more than his fair share of the results of risk miscalculations. This shot, better than any of the others, gives a good sense of perspective regarding the height of the bridge relative to its width. All across ... just enough time for a few more glory shots: And this is my "welcome to the bridge" look We pushed onward to the town of Kuanda ... passing plenty of streams along the way: In Kuanda we stopped for a drink and I asked the lady in the shop what the going rate was this year to cross the Kuanda rail bridge. I wanted to be sure of my negotiating position when we arrived there and had to discuss options with the bridge guards. 5000 she told me. 5000 rubles (about 125 EUR) to let a car over the bridge.

We rode 8km beyond Kuanda to the problematical Kuanda rail bridge. The guys in charge of watching over the bridge insisted that we couldnt cross. I offered them 5000 rubles in total, 1000 rubles per bike ... told them we would be across in 2 mins max.

We argued with him for about 15 minutes, but he wasnt budging. 25,000 rubles is about 800 USD ... thats an insane price to cross the bridge for all 5 of us. He was a grumpy young SOB too ... He said if we tried to cross it without his permission he would telephone ahead to Chara (the next town) and get us arrested for terrorism.

We decided to ride down to the river and have a look around. There was clearly a fording area about 200 metres downstream from the rail bridge. A track into the water on our side, and a beach marked by truck tracks on the other side. But it looked deep. And it had a decent current.

I decided to jump in and check it out. I tried to walk across and find a way ... but everywhere I turned was too deep. At one point the depth and current swept me off my feet and I began drifting downstream, unable to get traction with my feet due to my buoyancy. When I finally regained my feet, now 20 - 30 yards downstream from where I lost my feet, I decided thats enough. I cant even walk across the river, there is no way we are going to get the bikes to ride through it. Now soaking wet up to my chest, I returned to the guys waiting by the shore and told them we would have to backtrack 8 km to Kuanda township and see if we can find a truck to take us over.
._.

We started the day late ... it was after 1pm when we left Taksimo. Then altogether we lost an hour when Steve missed the turn to the Vitim bridge ... Then there was the Vitim bridge ... and then we faffed around at the Kuanda bridge for ages working out how to get across.

By the time we returned to Kuanda to look for a truck to take us over the river, it was 6pm.

On the road into town I spotted a guy working on a 6WD truck. It was a good enough place to start asking about trucks. But he couldnt help us ... he did suggest we ask around the centre of town though and gave us an address. And so we went back to the centre. While checking out the address, we were stopped by a guy in 4WD who asked what we needed. I explained a truck to take us over the river. He said no problem ... pulled out his cell phone and made a call.

While we waited a few locals began chatting to us. They told us of a group of 6-7 Foreign bikers that had been stranded in Kuanda for a couple of days before getting the train over, a week earlier. I knew who this was. This was the Kudu Expedition guys. Kudu had contacted me earlier in the year to ask about routes waypoints etc on the BAM. I told them as much as I could but thought they were nuts for trying to lead a commercial expedition on this road. But here they were ... doing it ... massive kudos to Kudu ... they had the commercial balls to actually give it a go.

By 7pm, we were at a makeshift loading ramp, on the side of the main track through town. Our driver came up in his 6WD KAMAZ and backed in. We loaded all 5 bikes on the truck and tried to pack ourselves and the bikes as tight as possible for the 8km ride in the back of the truck back to the river. It was going to be bumpy as hell.

When we got to the river, the trucked turned to where we had found the fording area, and just engaged low gear and ploughed in. As we looked upstream we could see the rail bridge guards staring at us from the rail bridge ... they had thought they would get 25k out of us ... and we were getting across for about a tenth of that.

On the other side, our driver backed into another makeshift loading ramp and we unloaded .... giving our driver, Grisha, his 3000 rubles. Wet from the top of our heads to our soles

For those who wonders, the water was cold and the current strong

When you do the BAM and ROB you inevitably have to cross a river or two.

Some you drive through with ease.

Some you drive through with difficulty.

Some you try to drive through.

Some will challenge your persistence.

Some you will conquer.

Some will conquer you.

But all will make your feet look like this

After crossing the Vitim, taken a swim in the Kuanda and finally crossing the Kuanda on the back of a truck, I was pretty shoot when we came to Balbukhta. We went inside the rail road station and the kind people there gave us some tea and biscuits before they closed down the station. No sleeping inside tonight.

Knackered I got my tent up and headed inside. Every night I had the same procedure. Of the Norwegians I was the only one with a Mac. Therefore I collected all the memory cards and download the pictures and videos. I then took a quick look at what we had captured that day and made backup to an extern HD. When this was done Erik came and said they had a fire going down by a stream, but I was to tired to join and took an early night.

I had crossed the Vitim River on my XC. A goal I've had for two years. I needed to be alone in my tent that night. I needed to contemplate all that had happened. Let it sink in. I soon fell asleep.

Some camp pictures below taken by Steve

We rode through some pretty countryside ... before reaching the Chara river bridge, on the outskirts of Chara. For some, its the Gnarliest bridge on the western BAM. Personally I dont mind it. Its 270 metres long, very rough surface, no edges and you have to ride along a raised ridge of 3 sleeper widths. But for me, my issue with the Vitim Bridge is its height. I dont feel good about the exposed height at all.

The Chara bridge by comparison, is normal bridge height. Maybe 20 feet (6 metres) above the ground / water. Most of the bridge is over ground that floods in season, but is usually just ground. Sure, care and precision is still essential, and a mistake can mean the end of your trip, but somehow for me, the lack of that 15 metre (50 foot) drop makes it feel tame in comparison.

Check out the exposed nails and stuff on the left side of the bridge. EtronX and I rode over ... but the other guys were having issues ... so EtronX (whose confidence had been sky high ever since the Vitim Bridge) went back and volunteered to ride Terry's bike over. Bongo accepted faster than you can say - "oi, get me a truck". EtronX had his helmet cam running at the time ... so this is his first crossing (first of three):

Riding shotgun with Terry along the BAM. This is from the stretch not long before Novaya Chara.

As we got close to Novaya Chara we met these guys. They had some small problem with their bike. When we left them they still had the problem

We got some food and checked in to Novaya Charas finest. Sometimes I don't know what is best; hotel or tent:huh

One good thing when being on a trip like this is that you really appreciate your own bathroom. You don't have to wear your sandals in the shower and you actually dare to sit down when taking a dump. Not being afraid of catching something with a long and difficult latin name :eek1

That said mind you, I am not complaining. Just observing the facts. We got beds and a few beers. Life was good

I am sorry that I am a bit behind with the videos. This clip happened a few days ago from where we are now in the story. It was our first attempt at a major river crossing and our first crossing using a rail road bridge